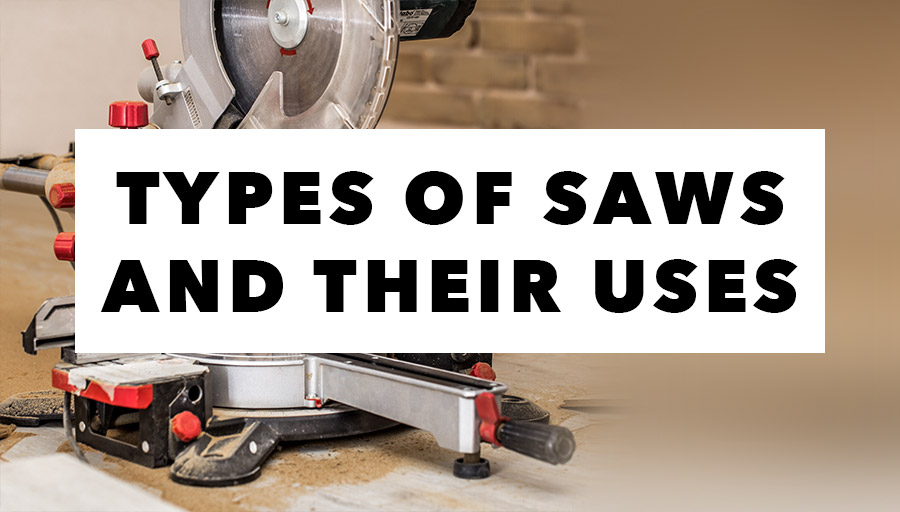 As an Amazon Affiliate we earn from qualifying purchases. All earnings are directly reinvested into this site to bring you free tutorials and project files - Thank you for your support!

Everybody knows a saw is useful for cutting wood, but few people realize just how many different types of saws exist and what they are used for!

In this post, we’ll go over the 27 most common types of saws you might encounter as a woodworker and what each is capable of. After all, we all know it’s best to use the right tool for the job!

Saws are some of the most useful tools in any woodworker’s toolbox. They come in different shapes, sizes, and designs, from small handheld models to large stationary tables.

Saws can generally be grouped into two basic categories: hand saws and power saws. Within each category are many different types, each of which serves a specific range of purposes.

There is some overlap between different saws in each category–rip-cut saws can be used in place of backsaws, for example. In general, however, it would be best to use each saw for the tasks they are designed for.

Hand saws are the simplest types of saws around. They range from basic crosscut saws to more specialized tools such as keyhole saws.

Most woodworkers always have two or more of these types of saws around. Even if you already have a power saw in your workshop, you will still find many uses for hand saws.

Back saws are short and narrow, boxy-looking saws with a reinforced upper edge. They are typically used with miter boxes and are favored for their ability to make consistently straight cuts.

Bow saws are a type of crosscut saw with long, thin blades. Designed for pruning, trimming trees, and cutting logs, they have an array of crosscut teeth that cut through the wood when the saw is pushed or pulled.

Coping saws are designed for trim work and other jobs that require precise and complex cuts. Like bow saws, they have thin, narrow blades, although they are better suited for delicate and intricate work than cutting large wood pieces. Their accuracy and versatility make them a popular choice for carpenters, toy and furniture makers, and even plumbers.

Crosscut saws have thick blades and large beveled teeth that make them ideally suited for cutting lumber. They come in two designs: single-person and two-person.

Two-person crosscut saws or “felling saws” are pushed and pulled by two users. These are typically used to cut timber across the grain.

Fret saws look similar to coping saws with a similarly long and thin blade. But the narrower and taller frame of these saws makes them better suited for cutting away from the workpiece’s outer edge.

Although they can make intricate cuts, fret saws have fixed blades that can’t be rotated. This makes them more difficult to use for detailed scrollwork compared to coping saws.

Hacksaws look similar to fret saws and coping saws, with long, thin blades. Although they are commonly used for cutting pipes and tubes, they can also cut wood, plastic, and various other materials when fitted with the appropriate blade.

Hole saws are power drill attachments that are used to cut round holes into wood. They can also cut holes into plastic, stainless steel, metal, and even concrete.

Like hack saws, hole saws can be fitted with special blades to cut into different materials. For really hard materials, it may be necessary to use blades with carbide or diamond-coated teeth.

Keyhole saws have a long narrow blade attached to a round handle. It can be used to cut patterns or rough circular holes into wood. They are useful for removing or replacing small sections of drywall. You can also use them to cut into walls if you want to avoid cutting into interior wiring.

Also known as pole runners, pole saws have 6” to 8” blades attached to a retractable pole. They can be extended up to 16 feet or more to cut high tree branches.

Pole saws were traditionally manual tools. Newer models are powered by gas or electricity and have chainsaw-like attachments instead of cutting blades.

These are the most common types of saws available. They have fewer teeth than many other saws, but they can be pretty effective at ripping through lumber. They are essential for most types of woodworking and framing and are found in most woodworkers’ tool boxes.

Power saws range from simple models that replicate hand saws’ form and function to specialized tools that can do so much more. They can be powered by electricity or by batteries and can be handheld or fixed designs.

Stationary band saws consist of a cutting table with the saw operated by a system of pulleys. These pulleys move the continuous band through the material, with the teeth doing the cutting work.

Band saws have a fairly limited depth, but they can make very intricate curved cuts in various materials. They are commonly used to cut wood, pipes, tubes, and PVC.

Portable band saws can do most of the same tasks as a stationary model, but with the added benefit of portability.

They are generally limited to cutting depths of 4” at most and require a bit more work to get cuts straight. Even so, the ability to make cuts that typically require a stationary band saw makes them essential for welders, plumbers, and metalworkers.

Chainsaws are more commonly used for cutting down trees, trimming branches, and ripping large pieces of timber. They have powerful motors that drive a toothed linked chain designed to rip through wood.

Chop saws are a type of circular saw commonly used for cutting metal and masonry. Instead of toothed blades, they use abrasive disks that spin at high speeds and cut through the material.

Circular saws are the most familiar types of powered saws. They use toothed blades with diameters ranging from 7.25” to 9”. They are commonly used for wood and metal, although they can cut plastic, masonry, and other types of material.

Flooring saws are portable power saws designed for re-sawing flooring materials. Although they are specialized tools, they are versatile enough to perform tasks that generally require table or miter saws.

Jigsaws are specialized tools that are mainly used to cut curves and non-straight lines. They have relatively short blades that cut in an up-and-down motion.

Miter saws are one of the few power saws that work pretty much the same way as a hand saw. They specialize in making angled cuts and are commonly used for trim work and other tasks that require precise cuts.

Radial arm saws are designed for making identical cuts into wood and other materials. They are capable of making a variety of cuts, including miter and compound cuts, and more.

Reciprocating saws have blades that cut into the material quickly with a back and forth motion. They are similar to jigsaws and can cut a wide variety of materials, including wood, tubing, plastic, and even nails.

Rotary saws have screwdriver-type handles with a fixed blade attached to it. They are versatile tools that can be used for woodworking, construction, and even arts and crafts. They are often used for small cutting jobs but can be useful for cutting into drywall and paneling.

Table saws consist of a flat table on which a high-speed motor is mounted. This motor drives a large circular blade which is raised above the table to adjust the cutting depth. Table saws are typically used to make rip cuts in wood, but they can be used to cut metal and masonry as well with the right blades.

Track saws combine many of the features of table and circular saws with a few additional features. They have a sticky track that aligns with the cut line so you can make perfectly straight cuts easily.

Now that we’ve gone over the different kinds of saws, I hope this is a helpful resource for you! Which of these types of saws do you use the most often? Which ones do you wish you had? Share your thoughts in the comments section below!

Builderology is your resource for all things woodworking and makerspaces! Browse our library of free woodworking plans, learn woodworking tips and tricks and be inspired to build something you love!